So, here’s where I am with my latest obsession, those babies in Fallujah and Basra:

Alone, not sure where to go, but still determined to try to find a way to help.

Pictures and images like this are imprinted on my brain: 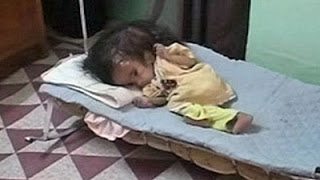 I’ve been exchanging emails with the courageous doctor mentioned in the Democracy Now piece, below. Here’s a link if you want the full story

And here’s a portion of the  transcript, emphasis mine. It helps to give some background to my efforts.

DAHR JAMAIL:  And going on to Fallujah, because I wrote about this a year ago, and then I returned to the city again this trip, we are seeing an absolute crisis of congenital malformations of newborn. There is one doctor, a pediatrician named Dr. Samira Alani, working on this crisis in the city. She’s the only person there registering cases. And she’s seeing horrific birth defects. I mean, these are extremely hard to look at. They’re extremely hard to bear witness to. But it’s something that we all need to pay attention to, because of the amount of depleted uranium used by the U.S. military during both of their brutal attacks on the city of 2004, as well as other toxic munitions like white phosphorus, among other things.

And so, what this has generated is, from 2004 up to this day, we are seeing a rate of congenital malformations in the city of Fallujah that has surpassed even that in the aftermath of—in the wake of the Japanese cities of Hiroshima and Nagasaki that were—that nuclear bombs were dropped on at the end of World War II. So, Dr. Samira Alani actually visited with doctors in Japan, comparing statistics, and found that the amount of congenital malformations in Fallujah is 14 times greater than the same rate measured in the cities of Hiroshima and Nagasaki in Japan in the aftermath of the nuclear bombings. These types of birth defects, she said—there are types of congenital malformations that she said they don’t even have medical terms for, that some of the things they’re seeing, they’ve never seen before. They’re not in any of the books or any of the scientific literature that they have access to. She said it’s common now in Fallujah for newborns to come out with massive multiple systemic defects, immune problems, massive central nervous system problems, massive heart problems, skeletal disorders, baby’s being born with two heads, babies being born with half of their internal organs outside of their bodies, cyclops babies literally with one eye—really, really, really horrific nightmarish types of birth defects. And it is ongoing.

And she—lastly, to really give you an idea of the scope of the problem, is that this is happening now at a massive rate. And she said her being the only person cataloging and registering cases, with no help from Baghdad, who is denying that there’s some sort of problem like this in Fallujah—she said that she could probably safely estimate that the number of cases, as high as the rate that she’s seeing, could probably be doubled, because so many people are having their babies at home and just taking care of it. You know, most of these babies are being born dead, and then they’re not reporting it whatsoever. So, this is an ongoing crisis. And the rate has not increased since last year, but it’s not decreased, either. It was still—when I talked to her last year, it was 14 times greater rate of malformations in newborns as compared to the aftermath areas of the nuclear bombings in Japan, and it’s the same when I spoke with her about this one week ago.

I’m back. Dr Alaani told me that she is in dire need of diagnostic equipment. She doesn’t have any. And if you read the transcript I’m sure you can figure out why. The Iraqi government doesn’t want to know. And what do you think the U.S. government thinks? More on that in a minute…

First, this BBC (note, the BBC) clip http://www.youtube.com/watch?v=dLGeE558kPg that features the hospital in Basra, and the other doctor who asked me to help him to raise money for the families, the one who takes up a collection among the doctors for the families every month. I promised him that I would find a way to help. I need to live up to that promise.

As an American citizen, I am ashamed and disgusted and dismayed by the NON-response by our government. As the reporter says in the clip: “When we contacted the America Defense Department. They didn’t respond”. Well, isn’t that nice.

This piece was on Sky News in 2009. http://www.youtube.com/watch?v=NWKfV0VAi8M

2009! Where is CBS? NBC? Save the Children? Where in the hell is the US government?

I just can not let this go. I can’t. I got involved because those pictures moved me to tears and I naively thought that I would find all kinds of aid groups working with the families and raising money and helping the families and the doctors. I had no idea of the complete and utter abandonment that these people, the doctors and the families, are experiencing. This is a nightmare, caused by Bush and Cheney’s folly, and these babies are just the latest victims in a long line of victims. But they have no one to speak for them.

And now that the “10 year anniversary of the Iraq War is over”. the media will move on as well. Not that they noticed in the first place.

I want to speak for these babies. I need a name for my project. Nothing I can come up with does the project any justice. So I am thinking of calling it simply The Children of Fallujah and Basra Fund. (unless someone reading this blog can help me think of something better). I want to start a crowdfunding campaign like indiegogo. I need to figure out how to get the equipment and the money to Iraq. I need help and support. Please join me: those families need our help and support.

5 thoughts on “More on the Babies of Fallujah and Basra”