Almost all of my people are away this week…husband and stepsons and stepson’s best girl – are fishing it up in Ocracoke, an island off the Outer Banks of North Carolina, It is one of said husband’s favorite places on the planet (mine being you-know-where), and I do have to say that for a beach vacation, there are few places more lovely when the weather is good and the fish are biting.  Jim took his boys there every year from the time they was babies, and when I came into the picture I was invited along, and it was where I fell in love with said boys, all 3, especially after Tom chased me with a sand crab for the first time.

Here is a picture of said best girl fishing at sunset: 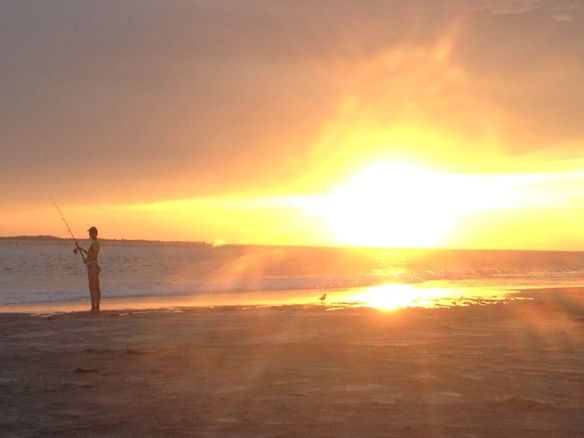 But alas, Ocracoke is also the place where we had the vacation from hell. An award-winning comedy of nasty vacation badness. And as I was regaling the sad tale to my friend the other day she said “You should write this down”, and I said “yes, I should!” And since she encouraged me to do so, here is my story in all its vacation hellish glory:

The year was 2004. It was the first time that Jordan was able to accompany us on our summer vacation. (FYI: She was 11 about to be 12 and the boys were 12 and 15). Everyone was excited.  Two weeks at the beach! Lots of preparation, and since there were 5 of us we decided to take 2 cars: Jim’s jeep, which pulled his newish boat, and my 4 year old Toyota, which I was ALMOST finished paying for, yea!!  We packed everything we thought we’d need for 2 full weeks of FUN in the SUN!

Aside: Right before we left Jim informed me that he was going to quit smoking (for the 100th time). We were closet sneaky smokers at the time, heading off behind the chicken coop when we thought the kids wouldn’t notice (Which in retrospect I’m sure they did). OK,  I figured I’d give quitting a shot as well, as I rightly assumed that it would be more difficult to sneak off at the beach. This is a very important background fact to the story, as it adds a big ole layered slice of stress to the tale.

Back to the story: As I recall the vacation started off well…everyone was happy and we had one or 2 good days in spite of the nicotine withdrawal. We were happy that our dear friend Doug and his son had decided to take a well-deserved break and spend a few days with us. They arrived and all was well, until, the day after Doug arrived, we awoke to a pouring rain. There had been predictions of a storm but man, this was really quite a doozy!! The winds were whipping and the rain was coming down in sheets, and it soon dawned on us that this was no mere storm but something tropical…could it be a hurricane? Why, yes it could! We later learned that we were not evacuated, as they usually do when there is a hurricane on Ocracoke, because the storm had intensified so quickly that it wasn’t safe for the ferry between Ocracoke and the mainland to operate. But I’m ahead of myself…

We lost electricity but thankfully Doug was there and among his million and one gadgets there was a generator. So we hunkered down feeling smug and lucky that we were among the few power-full. We watched the raging weather as conditions continued to deteriorate.

“Umm, why are all those cars parked up on that bridge?” “Uh oh, maybe we’d better check on OUR cars”

Yes, that’s right, by the time we figured out that this was indeed a hurricane, my car and Jim’s jeep had filled up with rain and sea water. Both. Vehicles. Totaled. And we were stuck on the island, as the ferries were not running. Doug thankfully did not lose his truck in the storm, so we did manage to have a few somewhat entertaining moments driving through the water-full streets in Doug’s two passenger tiny truck to go to the store and to survey the damage. But for the most part, the day following the storm was a nightmare of nicotine-withdrawal-fueled angst and calls to insurance agents and trying to figure out how we were going to get back to civilization with 5 people worth of stuff not to mention a boat.

We bid a fond farewell to Doug, who had to get back to work and who left as soon as the ferry to Hatteras opened, and we made plans to take the other ferry, the two-hour passenger one to the Swan Quarter part of the NC mainland, where we had scheduled a car rental. We booked a reservation at the only time slot available, an ungodly 7AM, and since were were car-less we had to walk  a few miles to the dock, meaning that halfway there Jordan started having leg pain (see this post https://sisterofminehomeagain.wordpress.com/2012/12/12/paris-with-my-best-girl-take-two/  to understand why), so the boys had to take turns carrying her and we barely made it on the ferry. Wheeeeee

The next part of the trip was a blur, I guess we made it to the car rental somehow and we rented a car to make the 10 hour trip back home. When we arrived back in Oella we were greeted by our next door neighbors, who, before we could begin to tell of our ordeal, had informed us that the teenager who lived in the house on the other side of our house had decided to throw a party a few days before…in our house. Thankfully nothing was broken and miraculously the house hadn’t burned to the ground, so after a nicotine withdrawled  fitful sleepless night, the next day we drove the rental car to Carmax where Jim bought a truck and drove it out of the showroom that very day, teeth gritted and vowing “I have one more week left of vacation and I am going to have it, damn it!” So we dropped off the rental car and we all piled in the truck to make the 10 hour trip BACK to Ocracoke, where we were greeted with unbelievably beautiful weather. The calm after the storm?

Not really, because Jordan started feeling bad on the way back down, and by the next day she was burning up with a fever. So I took her to the clinic on the island, where upon learning of her metabolic condition, (https://sisterofminehomeagain.wordpress.com/2012/12/12/paris-with-my-best-girl-take-two/) the kindly doctor suggested that I take her to the hospital, in Nags Head…80 miles and a ferry ride away. So I strapped her in the new truck and drove the 2 hours in a state of complete and utter breakdown exhaustion (stopping at the 7-11 to  surreptitiously buy a pack of Benson and Hedges Menthol 100’s, one of which I lit with my trembling hands as soon as I was able to sneak off alone), Anyway, we made it to the hospital and Jordan was diagnosed with some mysterious viral infection (we never did learn what it was) and she had thrush. They gave her an IV and some antibiotics and sent us on our way several hours later.

I can’t remember the next day, or was it several days? Jordan’s illness had sent me over the edge and I was a bundle of stressed-out nerves. Jim was still gritting his teeth determined to have a vacation if it killed him. Everyone tried to laugh and have FUN, I, however, was beyond fun. I was SO ready to be done with this “vacation”.

And what do you know? I got my wish! The day before the official end of the vacation we learned that there was another big storm on the horizon, and they were evacuating the island. We managed to get everything in the truck before it started to pour, of course everything was getting wet because it was piled in the bed of the truck, our jiffy-rigged plastic cover laughing at us as it flapped in the wind. There we were, the 5 of us, Jordan in the middle of the back seat with her thrushy mouth, the boys on either side…Jim still gritting his teeth, trying to drive through a hurricane at 1AM.  Me, a stressed out high strung big ole bundle of nerves shaking in the passenger seat. And hungry, we were all hungry because we hadn’t had a chance to eat. The only thing open was a Wendy’s, so my last fast food meal ever was a Wendy’s fish fillet. Everyone else had a burger, and the last tale from the vacation from hell is actually the most junior high school funny one, as the Wendy’s feast caused everyone to have the worst gas ever, and we couldn’t roll the windows down because of the rain. A fitting end to a foul day indeed.

I went back to work the next day, wild-eyed but nicotine-soothed after having sneaked off for a morning cigarette. My colleagues all asked how I enjoyed my vacation…oh were they in for an earful! 🙂